Redeeming Factors is a science fiction novel written by Jim Lane. Completed in 2000, it was published by The Raccoon's Bookshelf Press with ISBN 978-0-9771867-0-9 and featured a cover illustration by Eugene Arenhaus. 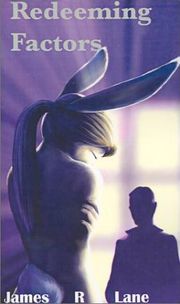 Jack Ross leads a relatively quiet life in post-millennium northeast Florida. A successful, divorced middle-age businessman with two grown children, Ross is also a man of many secrets; some bad, others worse. In a world finally settling down after a global upheaval brought about by the multiple discoveries of first, a cheap, universal star-ship engine, and second, sentient alien life, Ross becomes the first public customer of a very special multi-national, multi-species business venture. The company, known as Patrons, hopes to help condition various timid alien species to be able to coexist with the aggressive aliens in the universe. Mankind included.

Dozens of more-or-less anthropomorphic alien species had been discovered, and about half of the species were non-aggressive vegetarians. The remaining species, both carnivores and omnivores, were of mixed feelings about those who were, to them, looked up on as little more than prey. Most of the meat-eating species were willing to consider peaceful coexistence with the herbivores, but as in most loose-knit groups, there were always spoilsports. Therefore the Patrons concept, mankind’s contribution to interstellar peace and good will. Ross signs a two-year contract with a human-like female H’kaah, named S’leen, a rabbit-based being who is to become his companion. Like all of her people, she is inexplicably attractive and a sheer delight to be around. The very concept of human-like rabbit creatures strikes a pleasurable chord in all of mankind; we’ve loved such creatures from the time we were infants, and once grown, we still love them.

With the H’kaah, however, there is one additional factor: They’re sexy. Ross knows this and desperately tries to keep things on a strictly friendly basis, but he finds himself falling hopelessly in love with the charming creature who has come to share his life while learning to survive in a universe seemingly determined to have her for dinner. What follows is a roller coaster ride for both Ross and his alien companion, as he teaches her how to stand up against aggression from both her own kind as well as the universe’s most lethal killers. Ross, on the other hand, knows he must ultimately come to terms with his own nightmare past, a past that actively wants him dead. Jack Ross, you see, is a genuine monster, and as leopards have a tough time changing their spots, monsters, too, find seeking redemption a daunting task.

Sometimes, though, redemption seeks them.

Redeeming Factors on the publisher's website and online store