Reddie, or Reddie the Dingo, also known as Pabrika and as Reddie Manhattan on Second Life (born March 19, 1988), is a furry whose fursona is an anthropomorphic red-haired orange and yellow dingo with green eyes, which is essentially a mirror image of her personality and appearance. She lives in Van Nuys, California, and was a frequenter of the now-deleted gayfaggotinc.

Reddie is pretty much always seen with some sort of collar, two or three earrings, and several bracelets. One nearly always seems to be green, and she wears several watches. She always is seen wearing a black camisole/tank top, and wearing low, baggy pants held up by a brown belt with a silver buckle. 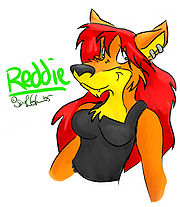