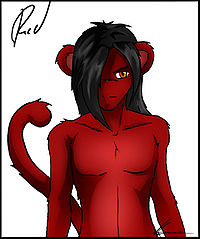 The birth of a Furry[edit]

Ron credits FoxxFire and Rog Minotaur, among others, for sparking his interests in the furry fandom. He discovered the fandom in 2004, and after two years, created his own fursona, choosing a red chimp/spider monkey as his species after discovering Green Monkey's art, which he is a huge fan of.

Red Monkey loves to roleplay, and can be found at the Tail Underground RP Yahoo group. He initially played under his character's name, Ron Elrich. But, due to his red fur, many called him 'Red', a name he decided to keep, in honor of Green Monkey.

While in high school, he trashed all of his art that he had completed for Art Class out of frustration with his teacher. He recently re-started his art career again and only has a few pieces done. His art and stories can be found on Fur Affinity.