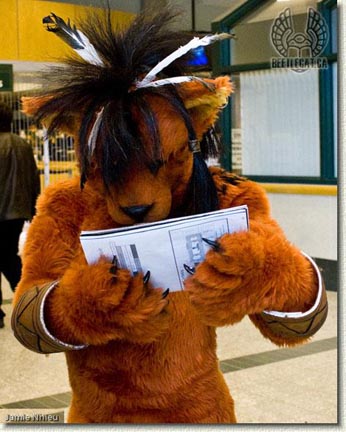 Red XIII is a character from the video game Final Fantasy VII developed by the company Square Enix.

This version of the character was built by Beetlecat as a personal cosplay fursuit. He was her second full fursuit and her first attempt at a padded body and shaped digitigrade legs. Although based on the original video game character, this Red XIII costume has gradually developed a life and personality of its own. 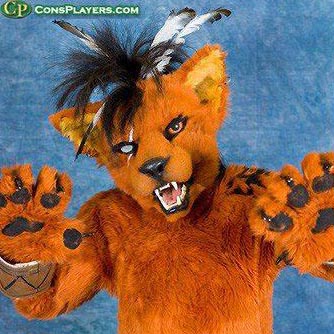 Red is made with a high-quality 1 inch fur. The longer fur on his legs and back is 3 inch black fur mixed with 6 inch black. His mane and braids are real horsehair that has been wefted, glued, and then cut and styled. His eyes are handsculpted in a taxidermy 'glass eye' style as are his nose and tongue. His teeth are a handpainted taxidermy jawset with sculpted lips and his claws are based upon those of a black bear. The feathers are imitation eagle and have to be replaced often.

Red's footpaws were remade in a more realistic style with sculpted, raised pawpads. And his leg padding was redone to make his front profile slimmer. 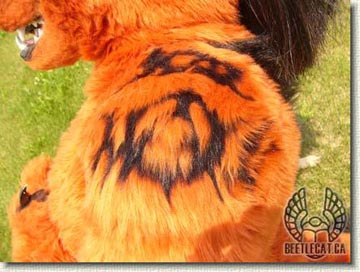 Red attended Animethon 14 in 2007 and won Best Overall in the Journeyman division. He was also at the Calgary Comic and Entertainment Expo in April 2008 and attended Further Confusion 2009.