RecovFurry was an Australian furry community project that was established to provide a free roadside breakdown and recovery service as well as emergency transport and accident assistance to Australian furries. The project was disbanded on January 1st, 2011.

While in operation, RecovFurry was the only furry operated recovery service in Australia. 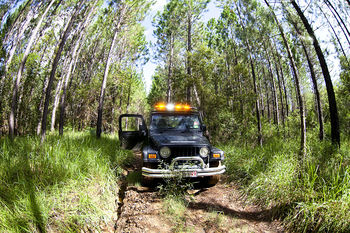 The project was originally founded by a member of Perth Furs as a hobby in early 2005 after operating as a nameless service for three years prior to its formation. The organization took on another member shortly after, adding another vehicle into its 'fleet' in late 2007 and began its operations as a recovery service.

Although it was only utilized several times by the local furry community, RecovFurry responded to over twenty five 'non-furry' accidents and breakdowns in the Perth CBD during its operation. In the autumn of 2008, the groups founder moved to Queensland after selling the service's 'flagship' recovery four wheel drive. This marked the end RecovFurry's Western Australia operations.

In February 2010, a new recovery 'flagship' vehicle was procured and RecovFurry began operations servicing Queensland's furry community. To celebrate its reformation the Service adopted a new slogan: 'For the Service of All Animality' - intended as a parody of the St. John Ambulance Service's vision statement.

This was the first 4x4 vehicle ever used for furry recovery. It serviced two furry incidents, and countless non-furry accidents during its service life. The vehicle was equipped only with warning devices, a tool kit and tow rope. It was retired in 2006 following a serious rollover on the Kwinana Freeway during bad weather.

This was RecovFurry's original 'flagship' recovery vehicle after it was established as an official furry service. It was equipped to recover and tow any vehicle up to 1.7 tonnes. This vehicle carried recovery gear on board at all times including tow ropes, 2 tonne hydraulic jacks and stands along with a full took kit, jump pack and traffic directive devices. It was equipped with the same visual warning devices that we're salvaged from the fleets first Rodeo, and was left abandoned somewhere in the Southwest of Western Australia, after severe mechanical malfunctions.

Acquired privately in 2010 and outfit with visual traffic warning devices (various flashy lights). It carries on board both on and off-road recovery equipment, first aid and fire response gear. It can safely recover any vehicle up to 1.8 tonnes.

The breakdown and recovery division currently services the Brisbane CBD and north side suburbs of Queensland only.

In an emergency they will respond as far north as Bribie Island and and far south as Surfers Paradise.

Due to volunteer shortages, RecovFurry has discontinued its services to Perth Furry Community.

RecovFurry was established as an unregistered non-profit volunteer organization. It's members selflessly provided assistance to the community 24 hours a day, completely free of charge. The project did accept donations for assistance, to help cover fuel costs when responding to an accident or breakdown, but it remained purely voluntary.

RecovFurry welcomed any new furry volunteers that where looking to help others. To be eligible to join RecovFurry, a volunteer was required to own, or have access to, a vehicle that is capable of recovering a disabled vehicle.

The RecovFurry website (défunt) stated that it did not require its volunteers to have official qualifications, although it did encourage them to seek training in areas such as first aid, traffic management and rescue before applying to join.