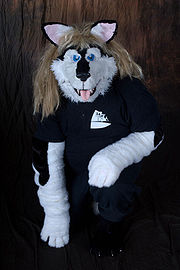 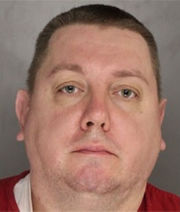 Rebel's name comes from where he was born, Conway, Arkansas, and also because he is a rebel (a Southern rebel)[4] at heart. His interests reflect this, enjoying anything with fast cars, big trucks, and motorcycles. RebelWolf was a mechanic at his own business, Down On All Four's automotive, and was studying computer programming on the side, learning code, until his arrest in 2016.

RebelWolf had a close connection to his wolf spirit, and a strong bond with nature.

Rebel's first fursuit was a partial husky made by Squeakychewtoy, which debuted at Anthrocon 2008.[5] Another one of his suits, named Falstaff, was made by Magnus Diridian (who wore it to Anthrocon 2007), and was modeled after artist Jessica Willard-Addams' character, Falstaff.

His newest suit was made by Beastcub and debuted in 2011. Its name is Rapture, and it is a black and red crux.

In June 2016, an associate of Parker, Jeffrey Allen Harvey, was arrested in Pennsylvania after attempting to arrange a sexual encounter with a person he believed to be a 13-year-old boy.[6] While in custody, Harvey told police he had met other individuals "interested in sexual contact with minors" online. This information led investigators to others, including Parker, 38, of Saylorsburg, who was arrested that same month after a preliminary view of his cell phone revealed several images of child pornography on it.[6]

While on custody, he was also accused of the sexual exploitation in 2010 of a child younger than 13 when he took a boy to the home of Kenneth C. Fenske (also known as LupineFox in the furry community) whereas the boy would be sexually raped by at least five men including Parker and Fenske.[7] Some of the men would wear fursuits. Parker's bail was set at $50,000 on the cell phone pornography charges, $250,000 on the June rape charge, and $500,000 on the 2010 charges while being held at the Monroe County jail.

Parker pleaded guilty to a count of child sex trafficking in August 2017, and faced a 30-year prison sentence.[8] He was ultimately sentenced to 30 years in federal prison in 2019.[9]