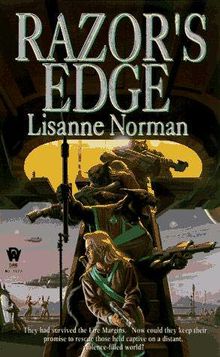 Razor's Edge is the Fourth book of the Sholan Alliance Series, written by Lisanne Norman. Although they are best classified as science fiction, they also include elements of fantasy and romance. Many of the main characters are telepaths, which is one of the major elements of the series.

They had journeyed to the past to save their present...

Carrie and Kusac - she a human telepath, he a Sholan one - have together found a love stronger than all the differences between their two races. They have survived the political manipulations of both their peoples, as well as successfully walking the Fire Margins, journeying into the past with Kaid, the third member of their Triad, and returning with shocking revelations about the Valtegan enemy and the ancient Cataclysm which transformed Sholan Society.

But the price of breaking with tradition comes high, as does the ongoing protection offered by the military. And now Carrie, Kusac, Kaid, and T'Chebbi must undertake a rescue mission to the distant world of Jalna to save present-day Sholans and humans who have been trapped there, as well as a Sholan pair from the age of the Cataclysm. What they can't foresee is that the Valtegans planted the seeds of destruction on Jalna long ago, transforming the locals into a dangerously unstable race and threatening the telepathic powers of Sholans and humans alike.