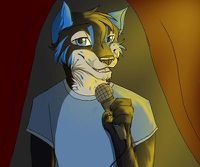 Rayne Blue (born November 20, 1990),[1] also known as Rayne Folf or Rayne, is a furry who lives in Wales, United Kingdom.[1] His fursona is a black and white folf with two distinctive blue stripes on his nose/muzzle, three blue stripes on either side of his head, and blue spots on the underside of his body and tail.[1]

Rayne began attending Cardiff furmeets in September/October 2012, and he has since attended various meets and events around the UK. He owns also owns a partial fursuit which he wears at furmeets, fur events, and, at times, in public.

Rayne is an amateur cover and karaoke singer, and has been recorded in a professional recording studio. He has also been a pantomime and stage actor since a young age.

Rayne has worked with abled and disabled young people around all of Wales, and won an award for "Inspirational Young Person" from Red Dragon FM in 2007, for inspiring them.