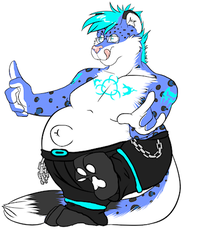 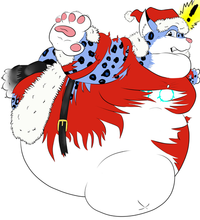 RavorKlaw, or Rav (real name James Starr, born August 16, 1977), is a furry fan from the island of Kauai in the Hawaiian Islands, USA.

RavorKlaw officially joined the furry fandom in 2010, but he started out on such imageboards and streams as ExperimentStitch, Stitch626, or simply just Stitch, being named after, and looking just like, the Disney character from Lilo & Stitch.

RavorKlaw's fursona is a fat and inflatable blue snow leopard with an oversized outie navel. He has blue hair, ice-blue eyes, blue glasses, and a symbol on his chest, back, and arms. He wears his trademark black rave pants, with a combination of neon-blue stars and stripes, and a big neon-blue belt buckle. Rav will occasionally wear chains on his pants.

RavorKlaw's fursona is capable of inflating to massive sizes. His outie navel also has this capability inflate massively (even to blimp size) and/or elongating stretch on its own. The outie has it own unique shape and look.

RavorKlaw or his outie are incapable of popping.