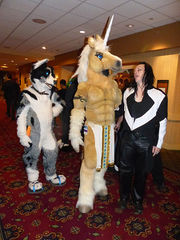 Raven at Califur amazed by suiters 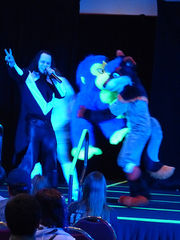 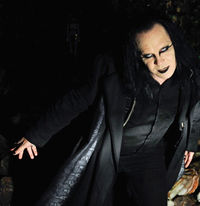 Raven Tremblay is a furry who lives in Orange County, California, USA.

Raven has been a member for the furry community since ConFurence 8, and can be found at many Southern California furry events such as The Prancing Skiltaire and SoCal FurBQ.

Raven is a staff member for Califur. He and Pan Pan are the theatrical leads. Raven can be found hosting most stage events at the convention. Raven was brought to ConFurence 4 to assist Pan Pan with music. Since then, he has never left.

Raven helps host dances at conventions as he is also a fairly well versed industrial DJ. Hosting at goth clubs in Orange County, Raven is well known within many fandoms because of his cross-sub-culture activity. The most notable being the anime vampire and goth fandoms, and has hosted at events such as Anime Expo and Necropolis.

Raven has been featured in many media events and roles.[citation needed] As of August, 2013, his most recent work was with Cleve Hall for Syfy's Monster Man.[1]