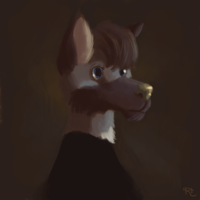 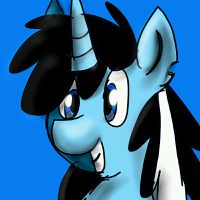 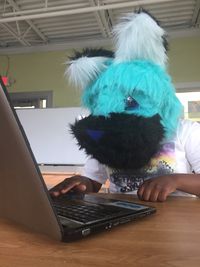 Raven Foxx at her laptop in her first suit head.

Elise Moore [1] (born April 25, 2003), also known by her internet persona Raven Foxx, is an anthro artist, musician, and fursuiter from Detroit, Michigan, USA.[1] She is the twin sister of pony artist Inkwell Artz.

Raven's main fursona is Rabi/Raven Blue Foxx, a young female individual of her vulpine-reptilian hybrid species called Droxen.[2] Rabi has the markings similar to that of a red fox, and is a shapeshifter, usually assuming the form of a fox, Eastern dragon, or common raven.

Raven's ponysona, Ravenhoof Blue, is a light blue unicorn with a black and white mane and tail. Her cutie mark is a black quill and a swirl.

In May 2017, Raven Foxx started creating personal fursuits.[3] Her first suit is of her fursona Rabi, and was constructed by Inkwell and herself.

Raven creates furry art in many different forms, most commonly as paintings. She uses both traditional and digital mediums. Raven is the author of the political and educational webcomic Animal Planet, currently on hiatus as of late 2020.