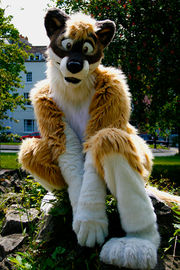 Ravell is a wolf therian who lives in Hertfordshire, England. He has lived in England, Scotland, Wales, and, for the most part, in the Netherlands.

Ravell ventured into the furry community in early 2005, and was the mate of Korrok, now single. He is vice chairman of Frantic Eufuria a furry dance event held in Bristol several times a year where he DJ's at the Rock/Metal part of the event and takes care of fursuiter amenities.

Ravell's main activity in the fandom is in fursuiting. He had made suits for Padfoot, Kelpie Dingo, Korrok, Banrai, Bariki and himself. He does not take commissions. He also owns a fursuit built by MixedCandy.

He has two fursonas, the earlier one being a wolf/hyena hybrid, the more recent being based on his therian self.

Ravell has attended several conventions, including:

Whenever possible he has also attended the LondonFur Meets since early 2008.