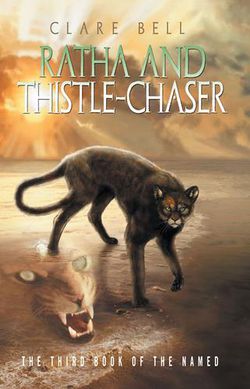 The series follows a group of sentient, prehistoric large cats called the Named, led by the female cat, Ratha. It deals with their struggles against the group of non-sentient cats, the Un-named. On October 18, 2007, it was reprinted by Penguin Group.[2]

Ratha, who gave birth to three cats in the first book, Ratha's Creature, had a non-sentient kitten who she named Thistle-chaser with the Unnamed cat she called Bonechewer. Ratha, in a fit of anger with Bonechewer, bit her daughter when she got in the way of her and Bonechewer's fight. This causes Thistle-chaser damage that, due to the lack of therapy, caused one of her legs to shrivel and becomes useless over time. Bonechewer, after witnessing what happened, tells her to leave and she does, regrouping with the Named. After Bonechewer is killed, Ratha has no clue as to where her offspring went.

Thistle-chaser, the daughter of the Named clan leader, Ratha, has no recollection of her past or true name. Due to this, she lives alone on a coastline, befriending the seamares that reside there, and goes by 'Newt'. In her dreams, a creature she knows as the Dreambiter, which bites her foreleg, often makes her go into seizures and fits of panic. A clan cat, Thakur comes across Thistle-chaser while searching for water. He befriends her and starts having her swim in a lagoon which acts as therapy for her shriveled leg. When he reports of the water and seamares that live there, Ratha decides to move the clan and their livestock to the coast, going as far as to capture the seamares. Thistle-chaser is upset by this and frees them, making Ratha, who refuses to believe that Thistle-chaser is her daughter, order the clan to attack Thistle-chaser if she tries anything like it again.

Thistle-chaser eventually learns that Ratha is her mother and realizes that the Dreambiter would be destroyed if Ratha was killed. Ratha bit Thistle-chaser when she was young, which was the cause of the Dreambiter. Thistle-chaser decides to attack Ratha and the two get into a fight. When Ratha gets her foot stuck between two rocks, Mishanti, an Un-named cub which Ratha was going to abandon, gets caught in the fray and tries to defend Ratha. In her fury, Thistle-chaser goes after him, only to be stopped by Ratha, who calls her names and brings her back to reality. Thakur and Fessran, another clan cat, arrive soon and together with Thistle-chaser bring Ratha and Mishanti to safety.

The Named are a group of prehistoric sentient large cats; they call themselves a clan and are led by the female Ratha. The clan is herds creatures and uses them as livestock, and also has fire, which they call Red Tongue, which they use for heat and protection. They are recognizable by their cleanliness and their eyes, which have a distinct look of knowingness and brightness. They can love and feel for other members of the clan and have morals and their own language. The group has Herders, who keep herd the livestock and protect them, and Firekeepers, who tend to the Red Tongue.

The Un-named are the opposite; non-sentient large cats who live in no distinct group, but band together sometimes for attacks. They are dirty and their eyes are distinct and unaware of what happens. They rely on instinct and have no language. A cat can be born Unnamed, but it is due to related linage with members of the Named. Unlike the Named, they do not herd animals, but hunt instead.The Unnamed are Sabre Tooth Cats.

Red Tongue is fire used by The Named.

Seamare is the term used for water creatures with protruding teeth, a horse-like head and neck, and a blubbery body. They have webbed feet, and live in a herd.The Seamare are Paleoparadoxia.[3]