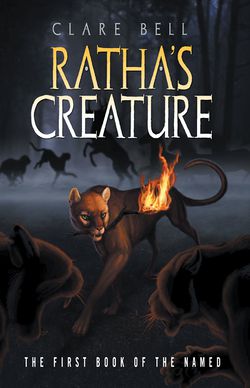 Ratha’s Creature is a novel by Clare Bell. First published in 1983 by Atheneum-Argo, Margaret K. McElderry (hard-cover edition), it was re-issued in July 2007 by Viking-Penguin's Firebird Books.

This novel is the first in the Ratha series, re-titled The Book of the Named.

Ratha and her people (the Named) are a clan of a strong self-aware cheetah-like prehistoric big cats. They have laws, languages, and traditions and live by herding the creatures, dapple backs (horses) and three horns (deer), they once hunted. Surrounding the Named are the more numerous non-sentient UnNamed, who prey on the clan’s herds. Mating between Named and UnNamed is forbidden, since the clan believes that the resulting young will be UnNamed animals.

Ratha, a young female, bucks the clan tradition of male dominance by training with the herding teacher, Thakur, to become a herder. All the herders are male except for Fessran, a strong-willed female who became a herder before Meoran took over leadership. Attacks by the UnNamed are driving Ratha's clan close to the edge of survival. Only her discovery and use of fire (“The Red Tongue" and the “Creature" of the title) offers the clan a chance to survive.

Meoran, the tyrannical male clan leader, opposes Ratha and drives her out of the clan. In exile among the UnNamed, Ratha meets a lone male and discovers that the clan is wrong about some of the UnNamed - he speaks very well and is as bright as any clan member. She dubs him "Bonechewer". He teaches her to hunt, the two mate and she has his young. When the cubs don’t develop according to her expectations, she realizes that they are probably non-sentient. She flies into a rage, attacking Bonechewer, biting and crippling the female cub, Thistle-chaser, and abandoning her mate and the litter.

Returning to the clan at Thakur‘s bidding, Ratha re-acquires "her creature", the Red Tongue. With it, she overthrows and kills Meoran. When the UnNamed attack again, she, Thakur and Fessran lead the clan in striking back with a new weapon, fire. The enemy flees in terror. After the battle, Ratha emerges as clan leader. She makes Fessran chief of the Firekeepers, those who build and tend fire for the clan. The Firekeepers also wield torches in battle. Ratha gives The People of The Red Tongue eacha torch, and they fight the UnNamed.

Ratha’s victory is bittersweet, however. Her mate, Bonechewer, was fatally injured in the fight and Ratha finds him dying. Despite everything, she still loves him and is wounded by his death. She is also troubled by the changes Red Tongue has made in her people. However, she knows that with the Red Tongue, the Named will survive.

An animated movie was made based on this book in the mid to late 80's for CBS Storybreak, which created adaptations of modern and classic children's books.