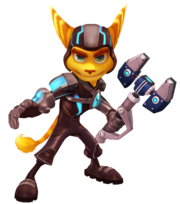 Ratchet was originally envisioned by Insomniac Games Vice President of Programming Brian Hastings as a space-traveling reptile alien who would collect various weapons as he progressed through the game;[1][2] Ratchet's final form was decided upon after Insomniac at various terrestrial creatures, such as dogs and rats, and feline features stood out to them because of the sense of agility associated with it.[3] In response to the negative critical reception of Ratchet's design and personality in Ratchet & Clank, Ratchet's personality was altered in Ratchet & Clank: Going Commando to be "less cocky, [...] much more friendly to Clank, and [...] able to handle himself better in stressful situations without being impetuous".[4]

Ratchet is a Lombax who was sent to Veldin from Fastoon by his father to save him from Emperor Percival Tachyon. The series begins as him just being a mechanic longing for adventure. But soon enough his life changes when he meets the diminutive robot fugitive named Clank. From there on, he and the small robot begin to have many adventures.

Ratchet tends to be quite headstrong and usually is not afraid to voice his opinion. During the first game he has quite a short temper, which fades in the later titles. Yet at the same time, he often appears concerned with how people view him. In later games he shows jealousy over Clank's notoriety. He was once having a relationship with another Lombax named Angela Cross, as seen in Ratchet & Clank: Going Commando, and later develops a romantic interest with a Cazar named Sasha Phyronix in Ratchet & Clank: Up Your Arsenal. He also seems to develop a relationship with a Markazian named Talwyn Apogee, over the course of the Future trilogy.

Ratchet's in-game model in Ratchet & Clank, particularly his facial animations and fur, was praised by Louis Bedigian of GameZone.[5] Gavin Frankle of Allgame found it hard to form an emotional bond with Ratchet or Clank, saying that Ratchet is "your typical teenager [...] who desires nothing more than excitement and adventure".[6] Benjamin Turner of GameSpy was highly critical of Ratchet, citing his uninteresting aesthetic design and rude, immature and immoral demeanor as reasons for his ire.[7] Johnny Liu of Game Revolution noted that Ratchet "starts out with a blue-collar attitude, but he's mostly there for deft observations and cutting remarks" and appreciated Ratchet not being "pigeonholed as a typical goody-goody", but concluded that he wasn't very fleshed out.[8]