Ranmaru (aka. Mercutio; born February 1, 1987), an anime cat-boy is originally from the Netherlands. He now lives in Chicago, Illinois with his mate, Arazia. His fursona is usually seen as a white Siberian tiger with different colored eyes, but he sometimes reverts to his cat-boy ways and appears as a young man with ears and a tail.

Ranmaru is a member of Lake Area Furry Friends (LAFF) and generally attends events such as softball, and bowling. In 2006, he was awarded with the title of 'LAFF Softball Travelmaster' for the longest distance traveled to attend a softball game. At conventions, he wears a partial fursuit created by MixedCandy of his white Siberian tiger character in oriental clothing. 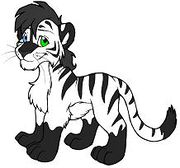 Ranmaru began role-playing through the Anime League message boards, where he created his first character Ryu -- a mutated dragon-hybrid searching for a purpose.

Around 2004, he began to play characters on several multi-user games (MUSH, MUX, MUCK). He has a number of characters across different games and genres, mostly based on fantasy, anime, and video games. His characters tend to share a few core themes, usually the involvement of fire, dragons, and magical abilities.

Being involved with the MUSH community has also expanded his ability as a coder, which lead him to being a tester and active member of PennMUSH. He has also become a staffer/wizard on a number of sites due to his knowledge of game code. His personal projects mostly involve integration between PennMUSH and the web.