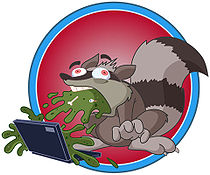 Rankin is the the erstwhile barfing mascot of Crush! Yiff! Destroy!, created by Donotsue. He was originally nameless, and was named "Rankin" after a forum member who played a raccoon character.

Variations of Rankin have appeared in the logo in time with the season, recent events, or just because Donotsue was feeling "inspired" - these have included: