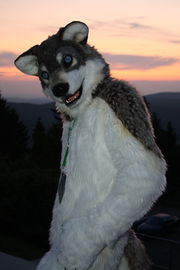 Randon Wolf, also known as Randon Riddler on Second Life (born May 24, 1984), is a fursuiter who lives in Eastern Finland.

Randon is the vice-chairman of the Finnish non-profit furry organization FinFur Ry, and one of the main organizers of the FinFur Summer Camp. He is also a moderator on Furboard, the Finnish furry forum.

Randon's fursuit was made in 2009 by Finnish fursuit and plushie maker Peking Snowfur.