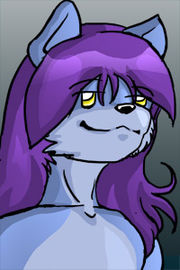 Art of Randi character, drawn by Randi the artist.

Randi (previously Randi Feymar and LunarYouko) is a female furry artist (Randi the character is male). She also is known online by her real name, Joanie Plue, which she uses on copyright descriptions on her websites.

Randi dabbles in many types of art, but she draws mostly digital works and recently took up drawing comics again. She started Truer Words, a furry webcomic, in 2008 December.

Joanie Plue was born in 1988, and has been interested in animals her whole life. In 2006 she became aware of the furry community and joined it in full in 2007-08 and now draws furries almost exclusively.

Randi has a few fursonas that she has used to represent herself online with. These fursonas include LunarYouko (Aya and Ayame), Souda Aya, and Randi Feymar.

LunarYouko was Joanie's first fursona dating back to as early as 2004. While the character was revised several times a few things always stayed the same. She was always a fox and had shades of blue fur and on occasion had black wings, though the wings were dropped in the last few revisions.

In 2007 LunarYouko split into two separate characters: Aya and Ayame. Aya was the female character and Ayame the male. Both were near identical in appearance.

Later the name LunarYouko became less of a fursona and more of just an artistic name used to represent herself with as opposed to being her identity.

Souda Aya was a fursona used for only a short amount of time during 2008 when LunarYouko fell into an identity crisis. This fiery cat represented her real life personality well, but was short-lived.

Randi Feymar is a newer fursona used by Joanie, created in December 2008 for the comic Truer Words. She returned to having a fox character, but with one crucial difference. This one is exclusively male. There is no female counterpart to Randi's character except within his own effeminate nature. Randi's mate is Tala Amaryllis, another character in the comic, as well as a fursona of Revinyesvr.