Randar Gonzales is a white-bluish husky who stands at 5'7" tall and weighs 137lbs. The color of his eyes is a light sapphire that reverberates from diminutive light. Randar is easily recognized by a pair of blue shades resting on his head, along with a pair of black basketball gym shorts. A signature to distinguished Randar from other Huskies/Malamutes/Siberian Huskies.

Randar typically wears his white Fruit of the Loom T-shirt under a black star Hawaiian shirt, along with black South Pole Crest Pocket Raw Denim Shorts that go down below to his knees in length. To get more comfortable, his shorts hang below his waist, exposing his Buffalo black Plaid Boxers.

On his head, he wears opplanet bolle dash sunglasses, it's lightweight, optically precise lenses are enhanced with an armor shell on both sides of the lens to protect against scratches. On his right wrist, he wears a Sterling Silver Italian 9-inch Figaro Bracelet, a memento of his grandmother. Around his neck is his blue and white surfer necklace, a gift from his mother. 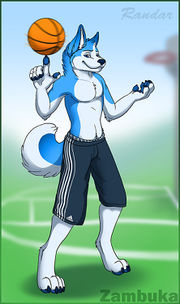 Randar first discovered the furry fandom in 2007, the year he graduated from Royal Palm Beach High School. It never really interested him at that time, but three years later, in March, 2010, things turned around when he mistakenly discovered a furry site on one of his typically boring nights. Randar loved the concept of the fandom and decided to become associated with it.

When Randar joined the furry fandom, Randar had no fursona at the time, or didn't have one on mind yet, but with a imagination and well thought-out mind, Randar was determined to create one within a couple of days. A friend of Randar named, Axel, showed pictures of huskies to Randar. Randar thought they were cute in general, and with little thought, he decided to portray as a Siberian husky for his fursona.

In real life, Randar is employed with Publix since 2006, the largest and fastest-growing employee-owned supermarket chain in the United States. Randar spends most of his time at his job, since (as of August, 2010) he is not in school.

In 2007, Randar attended Keiser University, a university college in Fort Lauderdale. He majored in "Associate of Science of Video Game Design", since he grew up with games, but upon graduating, with his associate’s degree in his hand in 2009, he immediately lost interest in it. Randar debated his next goal in life, but nothing immediately came to mind. As the months went by, his interest was piqued by the television program CSI. After watching a few episodes, he pondered joining the criminal justice field, and decided he wanted to become a Forensic Investigator.

Randar will be attending Palm Beach Community College in Lake Worth, Florida to study Crime Scene Technology in August in 2011, this year. This degree program will prepare Randar to operate behind the yellow crime scene tape.

When Randar is not working at his job he usually kills time by creating random collaborations on Photoshop CS4, hanging out with his friends, playing sports, strolling through the mall, and sitting in front of his television screen and doing what he does best: playing video games. At times, Randar also makes the effort to study his schoolwork, since he doesn not want his brain to go dead when he returns to school.

Randar loves music, and mostly listens to Rock, Techno, Hip Hop/Rap, Dubstep, and Latin music. He also creates his own music with the program "Fruity Loops Studio", but his lack of motivation is a weakness, and since then, he just lost interest keeping up with the program. The majority of his time, he usually works constantly, but manages with free time.

Now, Randar will trying to be attending to his first con, which will be Anthrocon in 2011.