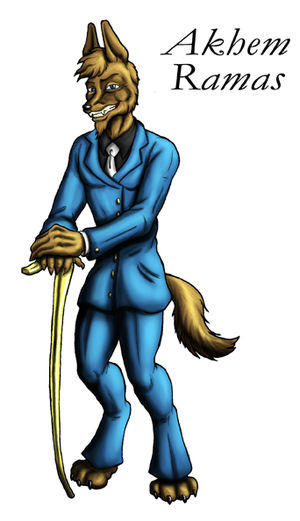 Mr. Ramas is on the executive board in charge of the superhero team Zodiac and an employee of the New Dawn Corporation.

Ramas (he prefers to be called by his last name) is both well known to the financial world and unknown to the public at large. His origins seem to come from a distant country where his natural talent for anticipating changes in the market and his gift with numbers attracted New Dawn who recruited him. Since that time, Ramas has continued to forward seemingly bizarre plans that have helped make the company the power it is today. At his zenith, Ramas was ready to become president of the company but took a demotion to spearhead his latest endeavor: the creation of the corporate Zodiac super team.

Ramas has yet to forward any concrete grounds for this seemingly disastrous career move but he seems to be incredibly optimistic that it will somehow benefit the company as a whole. Truth be told, Ramas has many supporters. His myriad of odd yet successful business ventures have left him with quite a reputation. Enough to warrant the company's full support for him and a few like-minded employees hand-picked by Ramas himself.

This elderly jackal is the driving force behind the corporate side of Zodiac. He is often seen with a sly grin, a slight limp and is well known for his appreciation of the dramatic and extravagant. Few people truly trust Ramas. Many feel that he has made shady deals with other countries while working for New Dawn for decades. Despite the lack of trust, Ramas does very well as his employers are forced to trust him. A situation that he finds very satisfying.