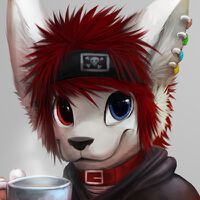 RaithSphere Darkstone is a furry who is based in England.[1]

RaithSphere's fursona originally started as an arctic white fox but slowly, over years, evolved into a fox-kitty hybrid, which he called a fitten.

RaithSphere attends ConFuzzled, where he helped with security in 2011-2019, as of the end of ConFuzzled 2019 he stepped down from his position as crew, it is yet unknown if he will take up a new position working at the convention.

RaithSphere has been a resident of Second Life since 2008, and is primarily a scripter and DJ, and also fills the role of Estate Manager at the GYC and formerly TYF.

RaithSphere is mostly seen around from time to time at GYC.

In the past, RaithSphere has been a Second Pride Builder in 2010 (Gay Pride in Second Life), Estate Manager for the Sim Solarian Republic (which was home to Underground Fur Club before October 22, 2010), DJ for All Fur Radio and Club Furzona. He has also been a DJ Manager, Scripter, DJ, Security, and Dogsbody at The Yiff Factory.

He scripted the second pride Halloween Haunted Mansion ride built by Kiroja Fluffy with the help of scripter's Beautiful Helendale and Agent Strangelove. A fully working copy of Disneyland's Haunted Mansion ride which happened to have it's 40 year anniversary at the time (October 2009). The ride was built in only 3 weeks time. The ride was open to the public for only two weeks, opening one week before Halloween and remaining open till a week after. It attracted many visitors and even got featured on CNN[2] as an example of the Halloween festivities in virtual worlds.