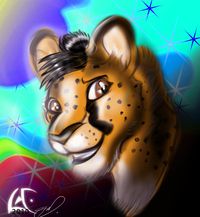 Rainstar (Rainstar9805) is a furry who lives in West Virginia, U.S.A. His fursona is a cheetah.

In real life, Rainstar enjoys his life in West Virginia, and considers himself to be somewhat of a bad-ass. He is generally seen wearing black t-shirts and a black hooligan cap. He has a complete plan for the apocalypse which he believes, and somewhat hopes, is soon.He likes to think his furry fandom part of his life is bit of a secret to those who know him by his real name. Over all he is one of the nicest people you will ever meet.