This article is about the character. "Rain" is also a nickname for D.C. Simpson. 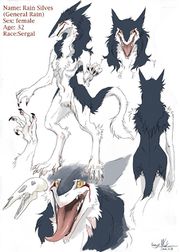 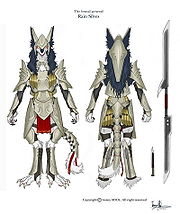 General Rain with her armor

General Rain Silves is a female Sergal character, a creation of Mick39. Rain is the leader of the tribe of Northern Sergals, also known as the "Shigu Clan". The members of this tribe are distinguishable due to their long fur, cold colors, and facing eyes. (in comparison to other sergals, Southern, Eastern and so on.)

She is different from the average Sergal due to her mutation. She is much taller and has an eye color mutation which causes her eyes to have a golden pigment instead of grey or blue. She is known to wear ceramic armor into battle and wields what seems to be a double-bladed lance of some sort. She uses the blood of her enemies to paint the 'blood-trails' that originate from her eyes. The most interesting part of her anatomy is the prehensile clitoral hood as common anatomy of female sergals, which a lot of people mistake for a penis and think that Rain is a hermaphrodite; however, she is female.

She is the main character of the series of stories Mick wrote about the world of Vilous, where she is the supreme commander of the Shigu clan. Throughout the storyline, Rain is shown as a cruel and cold creature, with a passion for bloodshed. The author has confirmed this brutal General loves to eat living prey, especially other Sergal children due to her lopsided attachment that was caused by her trauma. In Old Canon novella, however despite her violent and cruel nature, Rain seems to have some sort of "friendship" with the Werefenle(Old Talyxian) named Zyn, as well as affection for the character of Calcatto Lucien, who is of indeterminate race(human). In New Age storyline, she spent a very bad childhood with much abuse by her mother and other people of her village, due to her mutation. Then she disappeared in the forest. And she was brought up by Zyn who is the Talyxian-Associator, wolf in Vilous. New Age's Zyn is completely feral, wildlife species unlike Old Age's. Hence Rain is able to be said as "wolf-girl", like the San from Princess Mononoké.

In the internet, a whole of Sergals have often been considered and been misunderstood as same the Rain due to her popularity. But her characteristics and behavior confine to Rain and her vassals, not common feature of Sergals.

It is unknown who first thought of the "Rain likes to rape" meme,[clarify] but quickly[when?] Rain's popularity on 4chan skyrocketed to match that of Pyramid Head (which she has also been depicted as raping).[citation needed] Her nightmarish appearance and the prehensile clit hood quickly caught the acceptance of the wider audience. A large amount of fan art followed, with themes ranging from 'tame' to outright parody, where we can see Rain dressed up as a nurse, a schoolgirl or even a tennis player.

Some[who?] on 7chan consider Rain the mascot of their furry board and like her image in an easily locatable thread as decoration.[citation needed]