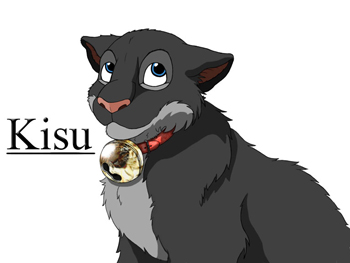 Kisu lives in Vantaa, Western Finland. He is well-known in Finnish Furry Fandom for his non-anthro feline art. He has interests in felines, panthers, traditional art, digital art, photography and Retro games.

Kisu's fursona is a male non-anthro or feral black panther / Amur leopard (Panthera pardus orientalis) with a white/gray stripe marking from under his chin to down of his groin. He has blue eyes, a black nose (usually; it can be pink), black pawpads (can be pink), long whiskers (can be left out), pointy ears and a fluffy tail.

Kisu has also another Fursona "Misu" which is a cyan-greenish eyed party african lioness and "Shiva" which is fluffy asiatic lioness.

Kisu's character has some alternate nicknames because of some requirements.

Changes in the past[edit]

Kisu's character had pink pawpads and pink nose during the early days of his life. Kisu has also had three different forms; he could be in plushie form and adult or a cub panther in feral form.

Kisu has two main art galleries on Internet, one of them resides on deviantArt and the other at Fur Affinity. Most Furries in Finnish Furdom knows Kisu's art with nearly 99% of the feline material he mostly draws. Kisu is also known for his hand crafted tails and for his works with traditional tools, oils, acrylics and many other things that can barely be called art tools.

His art is focused on feral feline characters, but he is willing to work on almost anything for commissions. Most of his art is based on Fan Art and or real life animals.

Kisu started making his first Leopard Panther fursuit in Summer 2006 but the process was discontinued. The second fursuit(Digitigrade Lioness suit) made its birth on 2008 and was in use several finnish furry gatherings and Eurofurence 14. 3rd fursuit "Kisu" was finnished just before EF 15 and got its first appearence in EF precumming meet at SlvWolfs's home. 4'th and 5th fursuits are currently work in progress

Kisu is a regular fandom member; he has run some art contests in the past, has lead some furmeets and planned trips to foreign countries with small groups and also organizes bus trips for furries. Kisu has made most of the finnish furries furry tails and held 2nd and 3rd largest furry group meets with Peking. Kisu is Secretary and Cheaf Financial Officer of Roolipeliyhdistys FinFur Ry (2010 and up)