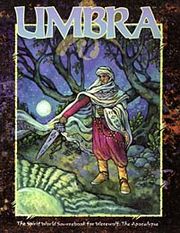 Rage is a trading card game originally published by White Wolf in 1995 based on the roleplaying game, Werewolf: The Apocalypse. The game is based around packs of werewolves battling each other and various evil monsters while trying to save the world.

Rage had five sets of cards: Limited/Unlimited, Umbra, Wyrm, War of the Amazon, and Legacy of the Tribes. The game was discontinued after Legacy and the license sold to Five Rings Publishing Group (FRPG).

FRPG was bought out by Wizards of the Coast (the makers of Magic: The Gathering and Pokémon), who were in turn bought out by Hasbro. Hasbro discontinued many of the games it had acquired in the take over, including Rage. The license for the game lapsed back to White Wolf.

Azrael Productions, who produced an online magazine, acquired permission from White Wolf to provide tournament support for both versions of Rage. However, Azrael was unable to acquire the license to bring Rage back into print. While under Azrael's care, there were two notable developments. The first version of Rage came to be called "Rage: Apocalypse" and the second version "Rage: Tribal War" so people would not be confused as to which version people were talking about.

Azrael Productions also assembled a group of dedicated fans to start designing new cards for the game. They started playtesting these cards before Azrael eventually abandoned the project. Azrael gave up rights to the partially tested cards, leaving the path clear for the playtesters to produce fan-made sets of cards.

The first set of these fan made cards, Intermezzo, was released in 2003. A total of six fan made sets for Rage: Apocalypse (Intermezzo, Periphery, Gauntlet, and Coda. They are collectively known as the New England Block) and two for Tribal War (Web of Deceit and Christmas Present '04) have been released since then. The cards are hosted on the official Rage site, River Von, but are considered legitimate by White Wolf and are allowed in regular tournaments and for use in online play. They are not hosted on the main White Wolf server due to copyright issues with the artwork. Many well know furry artists have worked on the fan made sets for Rage.

While Rage is currently out of print, it was available online for play with the Gatling Engine. They had a licensing agreement with White Wolf allowing them to develop online versions of White Wolf's CCG properties (Rage, Vampire: the Eternal Struggle, and Arcadia: the Wyld Hunt).

Due to complex legal issues, only Rage: Apocalypse is available for online play. Hasbro retained some partial rights to Rage: Tribal War and has been unwilling to license it to CCG Workshop.

The GatlingEngine eventually ceased development in 2009 and Rage was then ported over to the online player Lackey.

A major rules overhaul for Rage's rules was released in March 2006. The update clarified many card interactions and converted rulings about individual cards to global rulings. There was an additional update that errated the 18 most broken cards in the game and introduced new rules for past Lives that returned them to play.

November 2006 saw the release of the first set in the Ahadi block, War Council. This set introduced updates to the frenzy rules, Moot and Board Meeting rules, changed when the first combat hand was drawn, and allowed some Prey and Allies access to additional Gifts. War Council also introduced a new Wyrm faction to the game, the Unbound. Additional Gaia and Wyrm factions will be introduced throughout the Ahadi block.

September 2007 saw the release of Rainmakers, the second set in the Ahadi block. This introduces the Ajaba (werehyenas) and expands the Pentex Exec and Mokole factions. It also offers a fistful of cards usable by all groups. The Revised Rules book was also released at this time. While it largely reorganizes the old rules book into an easier to use format, it introduces a new timing system for playing cards.

Sets/rules changes currently in production, as of August 2010: