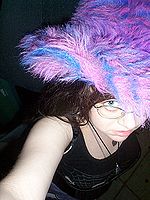 Blade (or Blade Wyng) is an anthropomorphic furry artist who usually signs her work "rae naomi turner" or (as of this entry)blade followed by a crescent moon that faces left and a phoenix bird. Her personal avatar is mainly her character Blade Wyng, a winged feline-phoenix that she had created in high school, around 1995. She was previously known as Demented Pixie before going back to using Blade as her nom de plume.

Blade was born July 4, 1978 in New Jersey and has spent most of her life on the same street where she had grown up. In 1996, she graduated from Pennsauken High School, then went on to switch her majors twice at Rowan University, eventually "retreating back to art" and graduating in 2002 with a BA in Art. While at Rowan, Blade had spent two semesters with the morning radio show, four or five years with Eyes of Gaia (the campus pagan group) and a couple of years as a member of the Gay/Straight Alliance.

Currently, Blade lives at home with her mom (a teacher as well as a knitter, spinner of yarn and painter), a younger brother and two cats (Bright/Brite Spot and Molly Wobbles).

Art has always been a big part of Blade's life, always wanting to keep her hands busy whether it be drawing or crafting something via clay or needlefelting. There are other crafters and artists in her family, so she comes by it honestly; or at least that what she believes.

Blade is the creator of the Roxikat Doll that was given to John Barrett aka Roxikat, as well as the Blade Wyng doll.

There are two that Blade mainly works on when escaping the mundane world, one is a comic in the works called Phoenix Three. Collaborating with Blade on Phoenix Three, as well as a few others, is Stephen Locke, more commonly known as Cole Sutra.

Two other projects of Blade's are Annoyance Factor Nine hosted on Drunk Duck with a mirror (that isn't updated that often) on Smack Jeeves, as well as VooDoo Dollz. Annoyance Factor Nine, or AF9, uses characters that are in the Phoenix Three project due to the characters being quite close to Blade and quite easy to use in situations that hit close to home or strike her fancy in covering in AF9. VoodooDollz is a bit of a more morbid series that Blade does mostly to vent things that are really getting to her, thus it is updated less often than the others.

Blade has been raised on science fiction conventions, having gone to many a Star Trek convention in her youth. She enjoyed meeting people and dressing up, having been in a few costume contests at the sci-fi cons as well as one at the Franklin Institute in Philadelphia, PA, so it seemed only natural to continue on going to conventions as much as she could.

Before discovering that the furry fandom had conventions that were near to where she lived, Blade had gone to Eclecticon, a fan fiction writer's convention, with a college friend of hers a couple of years in a row, the second year dressing as Blair from TV's The Sentinel, complete with jockstrap.

After discovering Anthrocon in 2001, Blade and Cole have gone every year since then, getting together with friends and meeting others of the fandom. If one was ever to need to find Blade, all they would need to look for is her purple fuzzy hat, though one would be able to find her and Cole in Artist's Alley (also commonly called Urchin Alley). In the fall of 2006, she and Cole discovered and went to FurFright, finding it small, but quite a delight. Though not able to make Fur Fright in 2007, it is hoped to be able to go to the convention in 2008. August of 2007 was a fun romp to FA: United where it was quite the weekend.

Blade Wyng is the creation of artist Blade (rae naomi turner) in her highschool years while writing a Sonic the Hedgehog fan fiction set of stories which wound up being epic in length, over a hundred pages not including the two sequels, and never seen the light of day for years.

Eventually a good portion of the characters in that fan fiction became a lot more than just Mary-Sue's to Blade and thus the comic project with Cole Sutra (another artist) was started of Phoenix Three, keeping a good portion of the elements the same only removing the Sonic the Hedgehog elements.

Blade is the youngest "triplet" sister born from a Chaos Stone on Kitemer Island. She was the only one to come out of the stone as an infant, her sisters aged 3 and 5 already. Her older sisters are Astral Acorn and Dazzle Star. This type of birth from a crystal made them the third generation of Phoenix on the planet Mohini. All three sisters are immortal, thanks to their heritage. Blade is a grandmother, despite her young looking age which she uses to every advantage. Blade has a light purple, almost fuschia phoenix bird mark upon her face which looks almost like a mask due to it covering the region around her eyes. She also has a reptilian underbelly, bearing scales.