RBW 2008 was a convention held over 27-30 November 2008 in London. It was hosted at the Royal National Hotel in Russel Square. Registration opened on March 8[1] with the theme The Masters of Alchemy.

2008 was RBW's first year as a self-contained convention. Despite attracting a record number of attendees (290[citation needed]), the convention ended up with a loss that had to be made up by private donations.[2] 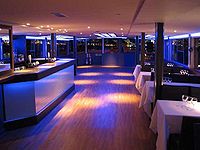 The Royal National Hotel in Russell Square played host to the convention during the day as well as providing accommodation to con-goers.[3] There was no preset limit on attendance for daytime activities; however, the boat (The Erasmus) scheduled for the Saturday trip on the River Thames had a maximum capacity of 310 people.[3]

The convention as a whole reportedly had problems, many apparently due to poor communication among convention staff before and during the event. However, some events were well-received, particularly those involving fursuiting.

An event schedule was not printed in the conbook or provided until part-way through the con. Many events were canceled, leaving those without fursuits little to do but play computer games.[4] Others found themselves without presenters.[5] The boat party itself did go well, but getting to it proved a challenge as the pickup location was changed on the day of the event[6]. Charity auction items were not displayed until the last day, and many failed to sell, though ultimately around £1100 was raised for the Wildfowl and Wetlands Trust.

Venue staff were variously reported to be "stoic"[7] and "surly"[6], while the hotel itself "looked like an eastern bloc soviet building (and inside looked like an old peoples home)"[4], with those setting up the event encountering several problems[6]. The security at the event also broke a con-goers ankle during the event.

Those watching from afar enjoyed live streaming of the RBW staged events, although the associated chat proved uncontrollable.