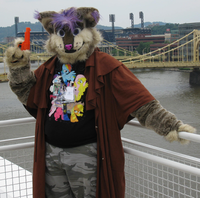 Powell has been involved with the fandom since 2006, and has drawn Stubble Trouble since December 2008. He has attended Anthrocon multiple times, and fursuited at multiple local events and conventions.

R. C. Powell's best known character is Rennon the Shaved, a fox/wolf hybrid with a shaving fetish who shaves his own fur off. Rennon is Powell's primary fursona and, ostensibly, the main character of his comic. His other best known-character is Gynette, a headless, shape-shifting jackal/spider mix. Much of his comic is devoted to her story.

Jynx the Lynx is Powell's secondary fursona, and his fursuit character. Jynx is sometimes dressed as a cowboy gunslinger.

In 2017, R. C. Powell wrote and published his first novel, The Origin of Power Penguin. He has also announced that a second novel of his, "Prophets of the Star Beast," is being written.