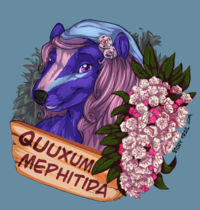 Qᴜᴜχᴜᴍ Mᴇᴘʜɪᴛɪᴅᴀ is a furry fan who lives in Pittsburgh, Pennsylvania, USA.

The name "Quuxum" (W:IPA: /Kwʌks'-əm/) derives from the metasyntactic variable "quux" (as used in Computer Science, alongside "foo", "bar", and "baz"), plus a pseudo-Latin ending. A previous iteration of the name was spelled "Qu+xum", but was later dropped because a plus sign is not amenable to usernames. She has used this name since 1998, and assigned it to her fursona upon its creation in 2017, attaching the last name of "Mephitida" to reflect her being a skunk.

Quuxum consistently carries several board games in her car trunk and is usually open to playing with anyone (but keep the games under two hours, please). She hosts occasional board game nights at various venues around Pittsburgh. She also plays Ingress frequently and, as of this writing, is a Level 16 Resistance agent. Her agent name is, unsurprisingly, "Quuxum".

She also has a slightly-unhealthy obsession for Unicode, slide rules and other vintage scientific artifacts, as well as studying Western Pennsylvania history and typing things in ꜱᴍᴀʟʟ ᴄᴀᴘꜱ. In her mundane life, Quuxum is an IT manager with specialties in Linux and scientific computing.

Quuxum began her activity in the Pittsburgh furry fandom in 2017, attending both Anthrocon and WPAFW that year. While her first choice of species would've been a true mustelid (such as a weasel or even a Wolverine), she felt a skunk remained close to the characteristics she wanted, as well as being more amenable to her desired colors. Nevertheless, she remains close to her greater musteloidae superfamily. Her unique subspecies is Mephitis mephitis lucens (Glowing skunk), which was named by River Soorjcat.

She can usually be seen at the Pittsburgh Furbowlaoke performing karaoke quite badly and is often recognizable by the pink and blue bandannas on her head.

She does not yet own a full suit, but does have a tail and ears in her colors created by AniMagicka[1]. 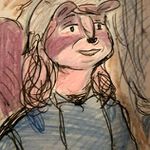 Quuxum Mephitida's fursona is a skunk with colors of indigo as the primary body color, and pale pink as the stripe color. Other minor colors are of powder blue, white, violet, and dark gray. Much like her human self, she also wears a bandanna on her head. Her favorite flower is the mountain laurel, the state flower of Pennsylvania.