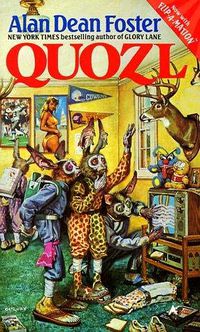 Quozl is a novel of furry interest penned by Alan Dean Foster, and illustrated by Jim Gurney (of later Dinotopia fame), published by Ace Books in May 1989 and released as an ebook by Open Road Media on November 4, 2014.

The story follows a species of space-faring, anthropomorphic, omnivore, rabbit-like aliens (the "Quozl") secretly settling on Earth during World War II, and a series of events triggered by a few dissenting members of the Quozl and some sympathetic humans that force the colony to go public in contemporary times with the help (in part) of a skilled Hollywood publicity agent.

They are shorter and more slender than humans and overall their appearance resemble anthropomorphic rabbits. Their tails are however longer and their fur often include different pattern (from jet black, to grey and brown). Eyes (of different colors) are large and glowing. Each hand has seven fingers and their feet are prominent (while cover book show cartoonish humanoid legs, in the novel they are possibly digitigrade, capable to outrun a bear in full speed). They have more developed senses compared humans, but no skill in swimming. They can speak human language but with quiet whispering voice, facial expressions are absent and replaced by movements of hands and ears. Females have marsupial-like pouches for their children: pregnancy involves little to no debility.

Quozl send generation-ships to colonize other worlds due their growing overpopulation, before meeting humans they had no clue of other intelligent life. While their history was extremely violent due inter-tribal warfare, Quozl society evolved into a pacifist and collectively Organized: while violence is not erased from their instincts (and they are capable to kill in self-defence), their philosophy center on meditation and their speaking style is artificially eloquent.

Sexuality play an important part in their society: biologically each individual is prone to have casual sex multiple times for days. Contraceptives and planned parenthood slow down overpopulation due their high fertility. There is no social difference between males and females. Quozl blame lack of sexuality (and related hormonal balance) to most of human defects as species.

While Quozl tends to have casual intercourses, an individual can have favourites (and engage in ritual combat if perceive jelousy), however once permission is given to conceive, only a mate is chosen for procreation. Parenthood is limited and young Quozl are indipendent in their schools and training programs.

Did you know? Paperback editions of "Quozl' contain a flip-book sequence in one corner of the book. Flipping through pages 73 - 271 will reveal a short animation of a Quozl rabbit stepping out a spaceship and having an accident with a skateboard. Hardcover editions of Quozl do not contain these flip-book illustrations.