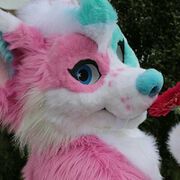 Quartz Husky (formerly Fjord Frost before Spring 2018), is a fursuiter and YouTuber who lives in Columbia, South Carolina, USA.[1] He is Director of Operations (and a board member) for Blue Ridge Furfare.[2]

His videos mainly revolve around comedy, sarcasm, and explanations of parts of the furry fandom as well as advice to furries.[4] 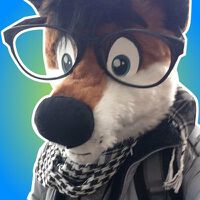 His (Fjord Frost?) fursuit was made by Lillilikespeas.[1]

His new fursuit was going to be named Kira[5], but decided to choose a new name because there was already a fursuit named Kira that was made by Mischief Makers.[6] His new fursona is a female instead of a male, and the new fursuit is a full suit instead of a partial like his previous one, and is in digitigrade form.