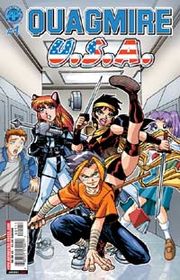 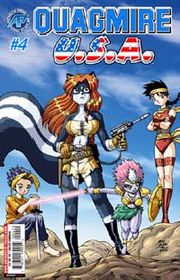 Cover art for issue 4. Note again, Kassy is featured in her Salusian form and her tail is noticeable. Quagmire USA is © Antarctic Press/Ben Dunn.

Quagmire USA is a 6-issue mini-series, created by Ben Dunn during the break he had taken from producing Ninja High School, set nine years after the 100th issue of NHS in which Kassy and Lexus first appeared. The series followed Kassie and a new character named Bento on their adventures in Quagmire.

Unfortunately, very quickly after meeting, Kassy and Bento have to go save Ricky Feeple from an alternate dimension. They bring at least two supporting crew with them and travel into the alternate dimension to extract Ricky. The adventures they have in this other world turn bad when they face down a megalomaniac bent on "gooning" the world's population to serve his every whim. Even worse, they return home to find the villain already there and in control of the town, and they have to fight not only for their freedom, but to free the city as well.

By the end of the mini-series, an unplanned reaction from one of the minor characters to the gooning of Kassy, Bento, and the deaths of two of her friends results in the series's universe being destroyed. In a surprise cameo, Ben Dunn himself appears to lend the surviving character his "godlike powers" for a period of one second to recreate the universe as it once was before she destroyed it.

Kassy, Lexus and Asrial make their return appearances in this series and the half-Salusian Kassy is the most prominent in the entire mini-series.