The Qiraji are a race of humanoid insects in World of Warcraft. They are almost exclusively found within the raid dungeons Ruins of Ahn'Qiraj and Temple of Ahn'Qiraj. The race itself came about by the old god C'thun enslaving the empire of Azj'Aqir, which was a civilization of intelligent, and malicious, insectoids. The Qiraji were created by C'thun who transformed some of the Aqir into avatars. For countless ages the empire of Ahn'Qiraj prepared for the revival of their weakened god and master, and his desire for dominace over all other living beings. The Qiraji themselves are, like the Aqir they were created from, cunning, ruthless, and cruel. They are organized into an almost military like fashion, with different castes of Qiraji, each with a leader. 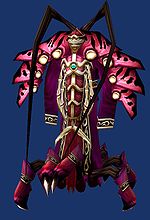 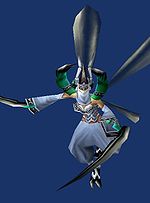 An interesting observation is the Egyptian theme tied to Ahn'Qiraj. The location of the empire is in the Silithus desert and the music within the raid zones have a distinct Egyptian quality to it. Also, within the Ahn'Qiraj empire are Anubisaths, which are giant stone constructs which, as the name might suggest, are modeled after Anubis.