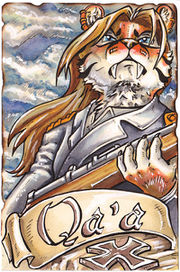 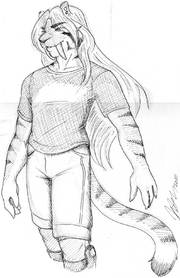 Anthrocon 2010 sketch of Qaja, showing his knee braces and an example of his civilian clothing.

Over the course of the near decade that Qaja has been in existence, his name has seen several changes.

After his player's decision to switch from using his real name, Qaja's name was switched to the simple Spanish "El Tigre" in July 2002. The change was made by Qaja's player after a trip to a local store, where he was given the nickname by a Spanish-speaking customer after a minor tirade.

Upon properly learning of his Germanic roots, Qaja's name was changed in March 2003 to the neutral "Das Tiger" as his player was only beginning to learn the tongue and at the time was unaware of the masculine form "Der". This name would stick with the character for just over four years.

On April 27th, 2007, Qaja's player called for change, not liking the status quo when it came to his character's name. Feeling that German names were a little overused and aided by the fact that his real name could be construed as German, Qaja's player set out to find something more exotic. Qa'a (later revised to Qaja) Badru Kebauet was the result. All three names are of Egyptian origin, with Qa'a taking from an ancient Egyptian pharaoh's name meaning "His Arm is Raised." The middle name, Badru, means "born during the full moon." The surname, Kebauet, is a separate translation of the name Kebechet, who was the goddess of embalming fluids. The name proper translates as "cooling water." A salute, his birthday and his Naval service are reflected in the name.

Qaja is almost an exact look-alike to his creator, except for the obvious difference in species. Standing 5’7” (1.70m), and weighing 145lb (66kg), Qaja displays a toned physique. Blue, piercing eyes adorn his face, as well as a smile that exposes 6.5” (16.5cm) fangs, which are mostly for show in his particular case. Qaja’s hair is the only other overt difference from his player, though the difference in length from human to fursona is shrinking as his player continues to grow his hair out in his recently-acquired civilian status.

Qaja's uniform embodies elements of German and American uniforms, past and present. The German portion is the top half, as Qaja wears a black SS Panzer overcoat, sans the Nazi-era paraphernalia. The rank symbols worn on his shoulders are borrowed from the WWI German Empire shoulder boards, while also owing to his player's opinion that gold is higher than silver. The American side makes up the bottom portion of the uniform, with Qaja's pants being a simple pair of "Service Dress Blues" from the US Navy. As an addition to the golden pips on his shoulder boards, Qaja also wears six tail rings and three piercings in each ear, all showing his Six-Star Admiral rank.

When not in uniform, Qaja can often be seen in black jeans and a t-shirt, though there will be the occasional moment where he is seen in a hockey jersey bearing his name and number.