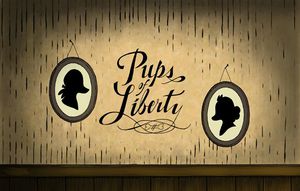 Pups of Liberty is a 2009 animated short film by Picnic Productions, which tells the story of the American Revolution with a cast of anthropomorphic dogs and cats.

John Kennel is arrested by the cats.

Pups of Liberty takes place in late-eighteenth century Boston, part of the "canine colonies" of the empire ruled from afar by the Royal TomCat.[1]

John Kennel prints the local Boston Bark newspaper, which his daughter, Anne, helps him deliver to the residents. One day, taxes are introduced on such items as teabones and newspapers, in part to pay for the upkeep of the red-coated feline soldiers who maintain order and defend the colonies. The dogs are not happy about the taxes, and they do not have the right to vote. Banding together under the slogan "No Laws Without Paws", the dogs push for change and start the "Americanine Revolution".

Pups of Liberty was produced by Picnic Productions (husband-and-wife team Bert and Jennifer Klein). The production took around two years, with post-production taking "almost as long".[2]

The movie utilises traditional 2D animation, and has a runtime of fifteen minutes. It debuted on October 24, 2009, at the Austin Film Festival.[3]