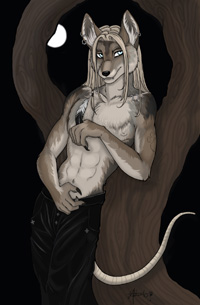 Puppy (born 1978) resides in Oxford, Mississippi, U.S.A., with his mate Anjel, who he has been mated to since October 2002. Beyond the furry fandom he is also involved in gaming fandom and plays live action role-playing games. He practices the faith of Shamanism and is studying to be a Coyote shaman. He is a longtime tabletop gamer, and is currently running a Shadowrun game, his favorite gaming system which he has been running for 11 years.

His fursona is a coyote-rat hybrid. He has been to several conventions, including Conifur and most recently Furry Weekend Atlanta.