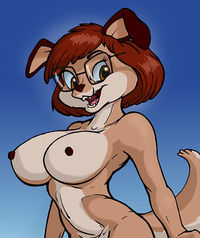 A pic of Pup hirself

Pup is a hermaphrodite anthro canine created by furry artist and Furrymuck patron Doug Winger. Shi is depicted as the younger sibling of his character Pandora Pup, and characterized as an extremely well-endowed herm or shemale with a much larger bust-line than hir sister and much more impressive male genitalia as well.

Pup can also be distinguished from Pandora in that shi wears glasses, has smaller ears, different colored fur and hir penis is bright red in color.

Pup is generally depicted as fun-loving, and curious.

Most art of Pup shows hir at a size around 6' in height, but many drawings also show hir as having grown much, much larger. Ranging from 12' tall (allowing hir to swallow foxes whole) to over 300' in height (crushing cars beneath hir feet).