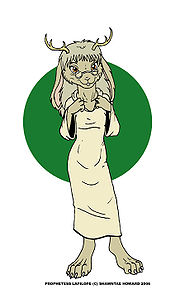 Prophetess is a character in Extinctioners.

The Prophetess made her first appearance in Extinctioners issue 8 where she told the legend of the phoenix and how it was dangerous for an immortal being to fall in love with a mortal. Especially one as powerful as a phoenix.

She would sacrifice her life for her adopted daughter Phenix, when Pharobus tried to claim Phenix's soul during her first life regeneration. Making a deal with Pharobus, she was able to save her daughter's life. Who got the better end of that deal is yet to be determined, but to say that she lived over 145 years means she had quite the nice long life.