Project Nomad is a 1993 computer game developed by Intense! Interactive and Papyrus Design Group, Inc. and published by GameTek. It is a cross between a simple space simulator, a trading game and an adventure. It has only been released for PC DOS operating systems. It works properly both under Windows XP and DosBox. 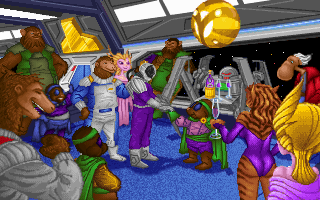 The player animates a human astronaut, who was sent on a single-man space exploration mission. The craft he receives is a rebuilt spaceship, which crashed on Earth due to unknown reasons, and had all navigational data erased. After the ship's launch, it is stranded in-orbit, due to damage the engine suffered. However, the player is rescued by Granger Tinker Brin O'Keef, a representative of the Alliance, which fights a highly advanced "race" of robots, the Korok, who are bent on destroying all life within the galaxy in order to secure their survival. One of the gamer's first assignments is destroying a rogue WR-4000 Korok spacecraft threatening Earth. Afterwards, he is relegated to Maka Bola, the Alliance's main world, where the real game begins.

The game features nine completely different races, ranging from the robotic Korok to arrogant, beautiful Phelonese, who are, as their designation suggests, anthropomorphic felines. Additionally, a dazzling array of trading goods, including exotic goods such as the alien Grun cattle and it's derivatives (fur, milk, cheese, meat) or Wanatu fur. The spaceship is also customizable, with different missiles (the most powerful being Phelonese Quietus missiles), loaders (Seeker Missile Loader for example), shield generators (may be an Ursor Mighty Fence booster), engines (an ancient Warp Drive for instance) and scanners (Argus Crystal Scanner of the Chanticleer) and jamming devices (Tangler jammer). To give the player a chance to employ this equipment, the developers provided an entire galaxy with several hundred planets to explore.

The gameplay itself is primarily centered around exploration and information gathering. This is mainly done through character interaction, and asking questions. The amount of text written for this game is simply astonishing, as every trade good and race is fitted with a description, which varies depending on the race, whose member is asked about the item. However, the cumbersome talking interface makes it difficult to ask many questions in a short time. Combat, while an essential part of the game, is simple and relies heavily on reflexes, which may discourage less experienced gamers. The economic element is stressed heavily, but requires experience to understand and operate, especially because the trade system is based on barter, not any currency system.

The game's plot is centered around finding a way to defeat the Korok and save the universe. The game can be roughly divided into acts, basing off the player's rank in the Alliance, which in turn is affected by the result of missions the player undertakes.

Apart from the main plot, there are also many sub-plots, such as finding and reactivating EX Korok robots, piecing together the origin of the species or each specie's history.

These energy beings are members of a race that has passed the stage of mortal existence, and have moved to a higher plane of existence, assimilating and storing knowledge. Their numbers are limited, but they are essentially a limitless source of information.

A race of anthropomorphic llamas, the Arden are the founders of the Alliance and masters of trade. Their homeworld is Ardania, and they worship the Less Ten. The Arden are ruled by a council.

These nomadic space raiders appear as anthropomorphic sharks. they are a violent and aggresive race, living off raids and piracy. Their homeworld was destroyed and converted into a mining planet by the Korok.

A race of humanoid beings, looking similar to angels. They are inherently peaceful and calm, always behaving with good manners. The Chanticleer specialize in crystal technology, which make up their ships, systems, medicine, weapons and even electronics. They operate from Second Harmony, a crystal-based space station orbiting a black hole.

The Musin look similar to chipmunks and are masters of subterfuge and infiltration, operating deep within enemy territory, which includes also maintaining a colony on one of the planets. Their homeworld is Newhome 3.

These Octopus based beings, with large noses, are known collectors of junk and hoarders of technology. They are of extremely ill-health and very hypochondric. Most races consider them a nuisance rather than an asset, however, they do play an important role in one of the subplots.

A proud, beautiful and extremely arrogant race of felines. They are a matriarchal species, in which females play the dominant role, running the empire, staffing it's navy, fighting etc., while males are reduced to sexual toys and procreation tools. Their empress is the Grand Phelan M'Nefer. Phelonese Navy fields the most powerful ships in the entire game, apart from Korok battleships and possesses the mightiest weapon - Quietus missiles, which take down almost every ship down in one hit, a true "Fire-And-Forget" weapon.

An enigmatic race of snakes. Their language is incomprehensible to outsiders, and they trade mostly in minerals, such as gold, silver or platinum.