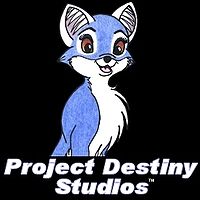 Project Destiny Studios is an animation and graphic design studio located in the State of Illinois in the United States of America. Founded in January of 2003 by Daniel Keller, Project Destiny Studios has made artwork and comic contributions to such publications as the Gold Digger comic book published by Antarctic Press, the Extinctioners comic book from Shanda Fantasy Arts, the Bloomington-Normal Indy newspaper, Illinois State University Daily Vidette Newspaper, the eXpressions Journal magazine, and several artwork convention books.

The creations of Project Destiny Studios have won many awards in art competitions over the years. In the company's first year of operation it won the Capcom Entertainment Inc. 2003 Fan Artwork Competition for the month of May, the Antarctic Press Award of Excellence for drawing the cutest female character of the year, and second place in the Lisle Founder’s Fest Banner Competition. Also worthy of note is that in 2005 a hand-painted animation cel created by Project Destiny Studios was chosen by Dominic Molon, the Curator of the Museum of Modern Art in Chicago, to be included in the Illinois State University Annual Student Juried Artwork Exhibition at the University Galleries.