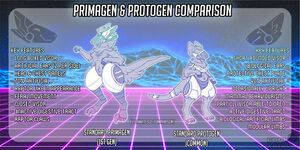 Primagens characters can only be obtained through auctions held on the Fur Affinity page. These auctions have been known to reach bids upwards of $1,200.[1] As of June 16, 2021, it appears that Malice-risu has disabled access to the page.[2]

Primagens are furry cyborgs which most notably have an electronic visor/display as a face. A Primagen's facial visor shows computer-generated eyes, nostrils, and a mouth which can all move and change shape in response to the character's emotions. A Primagen's visor forms a long snout shape. Primagens also has four robotic ears.[3]

The Primagen's body plan is humanoid with very large thighs and digitigrade feet. Primagen's features a large raptor-like claw on each of their feet. The species is stated to be "70% artificial," only having an organic brain, spine, and skin/fur. They purportedly also have an inactive organic digestive system.[3]

According to lore, Primagen's were created in another universe by alien scientists to scout out planets. They apparently learned how to escape from their owner and spread across their universe.[3]

Protogens (/ˈpɹoʊ.toʊ.dʒɛn/, /ˈpɹoʊ.tə.dʒɛn/) are a regulated species based on primagen. They are more open than primagen in that anyone can create protogen characters, but they are still limited in that certain design features are not allowed. These features are disallowed as they would make them look too similar to primagen. Protogens may not be hybrids, and they must be bipedal.[1]

Protogens are shorter than primagen and have smaller, more rounded visors. Their visors are made of very small machines which can effectively chew food which is then swallowed. Protogen have working digestive systems, unlike primagen. They are stated to be earlier prototype creatures that were eventually modified into the primagen.[1]