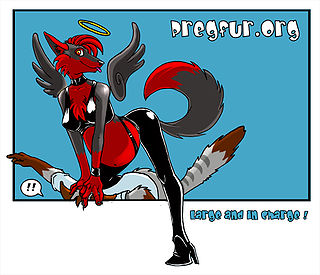 Pregfur.org was a friendly, diverse community dealing in a wide variety of tastes and interests regarding the subject of pregnant furries (including scalies, avians and herps,) and their depiction in art and writing.

Pregfur.org hosted a series of services for its members including a gallery, forum, IRC chat, and an Oekaki board.

Most pregnant furry media was allowed, with the main restriction main being the posting of hyper-proportioned characters. Pregnant belly size must conform to "realistic" ratios, be it anthro (humanoid), ferals, or fantasy creatures.

Adult artwork was allowed in special, separate folders, with a clear, clean preview image. The exception to the adult rule is the posting of media depicting child pornography, demeaning behavior, or unwarranted violence, etc. MPreg Furs are not allowed. Herms may be posted sparely.