Practice Makes Perfect is a webcomic by Nekonny which first began on February 23, 2016.[1] Previously hosted by The Katbox, it is now part of the Kemono Café webcomic community.[2] 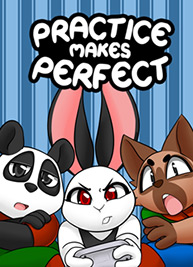 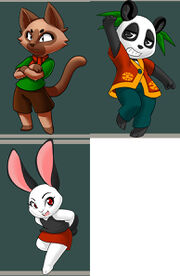 Starting from the top left, Addy, Drea, and Jess

Addy is a project of the internet generation. The frequent one liner/dad jokes and memes have been the cause of many a facepalm. Wants to become a gamer, but often becomes obsessed with a particular game mechanic and burns out. As a result of the online lifestyle, Addy does partake in occasional trolling, even with friends. In all other areas of life, Addy has perfected the art of procrastination and wears it as a medal, but by some miracle still manages to complete expected tasks within a second of their deadlines.

Drea is a chaos perfectionist that doesn't seem to have much patience for the way of things, especially when they are so obviously flawed. This is the main cause of the frequent complaints, although there is also a natural curiosity to understand how things run and how they cold be improved. For some reason, Drea thinks that names are too much of a hassle to remember, and that a much more efficient system is to give everyone food nicknames.

While Jess doesn't excel at any one thing in particular, she's pretty versatile bunny and tries to be at least a bit knowledgeable about any subject that's presented to her. This is probably a result of her lack of long term focus, causing her to cycle though a new hobby every other week. Because of this, she's not really a natural leader, although she loves group activities and spends a lot of time convincing her friends to embark on some grand new adventure.