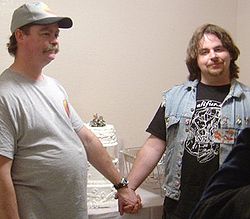 Pouchhopper (or just Pouch) was a kangaroo furry from Torrance, California who was both an artist and fursuit maker. His talents extended to the creation of plush toys, one-piece footed blanket sleepers and various fetish suits, as well as artwork depicting individuals locked inside fursuits. While this was not his exclusive motive, he was happy to cater to these groups.

Pouchhopper married his husband Rainhopper in January 2007 at a wedding ceremony conducted by 2, The Ranting Gryphon. Although similar to other previous furry weddings, this was not a pawfasting ceremony. His hopes were to create a new tradition for furries who shared the same level of love and dedication as he did to his husband. He wished to make it something genuinely unique to the furry fandom in every aspect.

Pouchhopper was well known throughout many communities, several of which he ran as groups on Yahoo, including his "trapped in fursuit" group, the "footed sleepers" groups, as well as several fursuit workshop groups.

Pouchhopper was also known as Mr. Costume in the early 1980s and his first contribution to the fandom was the donation of several thousands of dollars to help finance and organize the first furry convention known as ConFurence 0. At these conventions he also held several panels on fursuit construction and design.