A portrait or port is an avatar used on the MMORPG Furcadia. Portraits are 95x95 pixel pictures of a user-designed character on Furcadia. Ports are uploaded to port spaces, which can be bought at Furcadia's Digo Market. Ports can be seen when your character's avatar is clicked. Portraits can be created in various programs including Furcadia's own art program .fsh editor. Most portraits can be remapped but some will not. 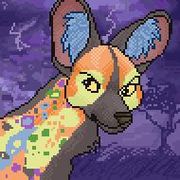 A furcadian portrait unremapped, in its raw, remappable form. Image blown up 200% 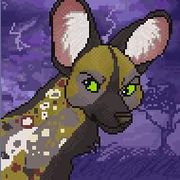 A remapped version of the same portrait.

Portraits crafted specifically for this purpose do something called Remapping. That means when you change your character's colors in the Furre editor, the corresponding color on the portrait will change, too. There are 10 colors that remap, to 10 different color options. The colors and their corresponding options are as follows:

Remapping colors is accomplished by color replacement. A remapping portrait will have a coloration compatible with the above list. As an example, a pair of pants that can remapped will be colored with purple.

If you need something more visual, check the examples to the left and right. These two pictures show a blown-up version of one portrait, the non-remapped remappable version, and after it has been remapped. Notice the background doesn't change. That is because its a color with no remapping option. Not every color in .fsh is remappable, only the ten, to provide artists an opportunity to make backgrounds or accessories that don't need to remap. Note: Badge is not displayed in this particular portrait. Just like eyes, it is only one shade of red, and has no shading options. This is referred to as "flat shade."

Some portraits do not remap. These are usually portraits containing two characters, markings that require more than the ten color options, or ports with backgrounds so complex they require colors usually used for remapping, such as sunsets. Non-remapping portraits can use the colors that are usually used for remapping without the worry of your colors changing. They will remain in the raw, unmapped state If you choose the "Non-Remapping" option at the time of upload, or saying `remap port# while you're playing the game to change your option.