This article is about the person; for the faery creature of Irish folklore, see Púca on Wikipedia. 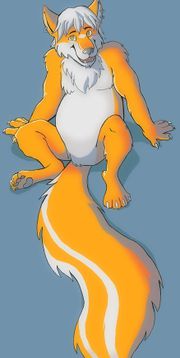 Pooka Wolfunk is a furry from a small northern suburb of Chicago, Illinois, U.S.A. His fursona is a Wolfunk, a Wolf-Skunk hybrid. His fursona is a 6'2" striped skunk with caramel brown fur on white stripes. He has dirty white head fur, which is on the shaggy side and often covers his eyes. He has orange-brown eyes and a black nose, with a white diamond on the top of his muzzle. The wolfunk is on the fat side, at a minimum 450 pounds. He's a gay, gainer, and bit of a slob.

Pooka also has a second character, which he often likes to RP as: David Wilco or D.W.[1] is a chocolate-brown Kodiak Bear who clocks in at 9'1" and weighs a svelte 1,000 pounds. He has a medium build, large shoulder span, and quite muscular legs (probably from carrying his size, naturally, and from years of sports). He appears as a fairly typical looking kodiak bear; his fur is mainly brown although it lightens around his muzzle and eyes. He tends to keep his headfur on the longer side, typically falling into his eyes. He has several ear piercings as well as a labret piercing. His eyes depend upon the season, shifting from a deep brown in summer months to amber in winter. D.W.'s weight tends to fluctuate especially in gearing up for winter; so in fall he tends to put on about 100 or so pounds without really trying; he typically sheds most of this weight once temperatures rise.

The man behind Pooka and D.W. is an engineer by trade, though his hobbies include: drawing/sketching, graphic design, photography, and writing. He has designed a logo for an Italian-French restaurant in Chicago and is a published journalist, currently working for an engineering media company. He has been active in the furdom since 2004 and a fur since 1999.