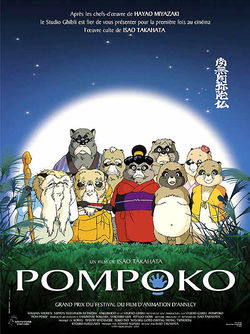 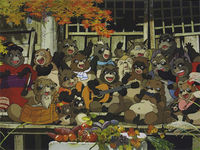 A still from the movie.

The movie follows the plight of tanuki, referred in the English dub as just raccoons, as they face the destruction of their forest by the expansion of man. These tanuki are depicted in three ways at various times: as realistic Japanese raccoon dogs, as anthropomorphic animals which occasionally wear clothes, and as cartoony figures based on the manga of Shigeru Sugiura. The tanuki use these forms, as well as other shapeshifting powers to repeatedly but unsuccessfully drive man away from their home.

The film also features kitsune, who suggest to the struggling tanuki that the best way to survive is to just adapt and give in to the human world, becoming as them.