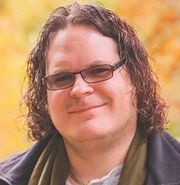 Tiger-Nick, or Tiger Nick, is a furry fan and Christian fur who lives in Michigan, USA.[1]

Tiger Nick has been in the furry fandom since around 1996. Tiger Nick ultimately found the fandom through FurryMUCK, which he found through a conversation on IRC sometime early 1996. Originally his user name was Pxs. As Pxs he mainly played in the FurrySpace region of the MUCK.

He is currently staff at Furry Weekend Atlanta (FWA) as one of the board of directors, whereas he has been in staff since 2006 (fursuit staff in 2007, Board of Directors and fursuit staff in 2008, and COO since 2011). He was also staff for Rocket City FurMeet as fursuit wrangler for 2007 and 2008.

Tiger Nick's fursona is a tiger.

Tiger Nick made his own fursuit, Polo, in August 2006. A fun-loving young tiger character, in no way representing Tiger Nick's fursona (other than being a tiger).