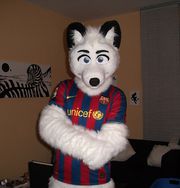 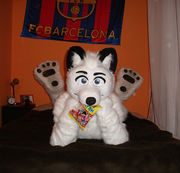 Polarwuggs or Polar (born January 28th, 1983)is a German Arctic Fox from Bonn in western Germany.

Polarwuggs used to be a Furry Artist but he recently stoped drawing, caused by the lack of inspiration. You may see him in his fursuit, made by Joecifur in 2010. Polarwuggs will attend some furry conventions in 2011, such as FWA and MMC.

After School Polarwuggs Joined the Bayer Corp. and finished his training as Chemikant 2001. After that he went to the civilian service before he made the decision to start a 2nd training in a privat school as a Biologisch-Technischer Assistent. He finished the school at the top of his class. For some months he joined the Neurophysiologic Departmend at the University of Cologne. But switched then to a new field and joined the Dermathology Department of the University of Bonn where he work since june 2006. His major fields are Molekular Biology, Cell Cultur and Mikrobiology.

Polars interests includ Traveling, Movies, Video Games, Musik, Soccer and Sport in general. He is a big Soccer fan and his home team is the catalan club FC Barcelona as a proud and grumpy German he also cheers for the Germany national football team